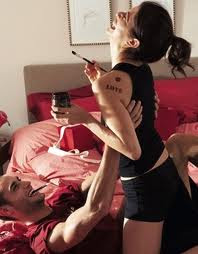 Six from Love By Design - (Victoria and Russ - reality make-over decorating show)
In this scene Victoria has just finished painting designs on Russ' body with Godiva melted chocolate. When she was finished she moved back and examined her work—his body.

She took out the paintbrush that had been clenched between her teeth and said, “I might have a new career.”
“As a torturer?”
“Body paint artist.” Her feline smile clued him into what was going to happen next.
Little flicks of her tongue skittered across his skin as she lapped off the chocolate as if she were a kitten given a bowl of cream. Didn’t she realize she was toying with a tiger? 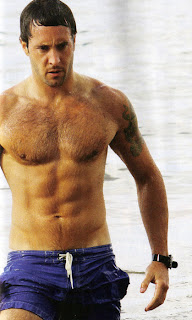 
There you have it. And for the good of my fellow woman if Hawaii Five-O wants to use any of these plot devices I won't ask for royalities - though I'm totally serious about being a guest star - I would have to bring the husband I suppose - AWKWARD.
Posted by Liz at 7:28 AM 9 comments:

I've talked before writing from a man's POV versus a woman's POV. The example below happened on Facebook last night and illustrates the way men really think.

Ok so last night I posted a couple of sentences from my work in progress Going For It - here it is...

Jake tried pretending she didn't exist - that her loveliness was a figment of his imagination but her soft moans along with her fevered pitched screams of her calling his name haunted his dreams. Hannah was so right - he did dream of her.

Here's Carmen's version: The Patriots could pretend the Jets didn't exist - that Sanchez's loud moans after getting sacked so many times along with Rex Ryan's fevered pitched screams of the referees calling "Patriots touchdown" haunted his dreams. Carmen was so right - the Jets suck :-

My newest recent, Playing For Keeps, reached #7 on one of the Amazon Bestseller lists! Here is end of the first kiss scene.
Playing For Keeps is about a woman sportswriter and a professional football player. The scene takes place inside a stuck elevator. After playing a couple of rounds of Go Fish (a card game) – one thing leads to another – and they are kissing – and then…

“Ryan, we’re going down.”
“You’re going down?” he asked dazed.
She pounded on his chest. “No, you idiot!”
The realization of what she meant hit him like a bucket of cold Gatorade. He immediately released her and stepped to the far side of the elevator shaking his head. “And we spent the last hour playing Go Fish.”
Posted by Liz at 6:00 AM 13 comments:

Love of beauty and the desire to create it is a primal instinct of man. Eleanor McMillen Brown

Another one of Victoria's (my heroine from Love By Design) inspirations to become an interior designer is Eleanor McMillen Brown. Another pioneer in interior design she started her career in 1924 and started one of those most influential companies in design. She combined a sense of elegance along with business savvy. Here are some great quotes...

If you get it right the first time there's no need for change.
Eleanor McMillen Brown

To develop in taste, quality, and personality one is obliged to respect the past, accept the present, and look with enthusiasm toward the future.

For without the private world of retreat man becomes virtually an unbalanced creature.
Eleanor McMillen Brown, Creating a Beautiful Home by Alexandra Stoddard

We are often inclined to think of art in terms of pure decoration rather than as a vital part of our everyday lives.
Eleanor McMillen Brown, Creating a Beautiful Home by Alexandra Stoddard
Posted by Liz at 4:57 PM No comments:

Email ThisBlogThis!Share to TwitterShare to FacebookShare to Pinterest
Labels: Love By Design

I had lots of fun making the book trailer for Love By Design. I hope you enjoy it!