Makeovers at home and in my writing...

I'm in the process of updating the outside of our house. We took down a huge tree that after 25plus years had torn up the driveway. It was a beautiful tree and I hugged it before it was cut down. But it was a good thing we did. The tree was rotting on the inside. So better a controlled cut down versus it falling on the house. My husband wanted the driveway widen and it led to this... 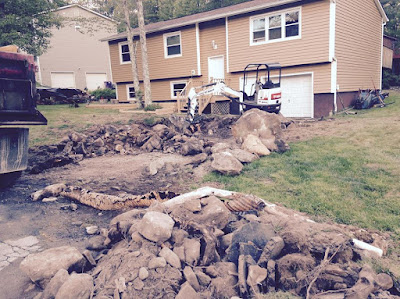 The driveway is now leveled and graveled and next week the blacktop will go in. My husband is building a retaining wall. I'll post pics when its done.

Meanwhile, I'm starting a new series called Champions of the Heart. The genre is still sports romance  but I'm building the series so I can write about the other sports that I love. The series will focus on the New York sports scene. The first book will be about football though. The team, the New York Kings are the cross town rivals of my Fantasy Football Romance series, the New York Cougars - kind of like the Giants and Jets of NY. I thought it would be a nice bridge between the two series!

And along with my makeovers at home and in my books - the heroine of my next book, Alexa Reeves will also be getting a makeover!

I'm really excited about this book and Champions of the Heart!

Do you ever get restless to start over? Or to make over a room in your house?