Silliness is not limited to kids...


Please click above to see a Halloween video...I make a cameo appearance....
Posted by Liz at 6:57 PM No comments:

"Censorship is telling a man he can't have a steak just because a baby can't chew it." - Mark Twain

I read banned books. I know I'm such a rebel...

So I challenge you to read a book from the top 100 banned or challenged books found here...

My choice is Kim by Rudyard Kipling...here is the description from amazon.com

In Kim, Kipling creates an exotic atmosphere, full of vivid characters and incidents, and immediately draws the reader into his strange world. The novel concerns a religious quest and a quest for identity, and includes both enlightenment and espionage, tranquillity and violence. It combines social, cultural, and political history with the hardships and goal of a travel book. Like Hermann Hesse's Siddhartha (1922), Somerset Maugham's The Razor's Edge (l944), and Iris Murdoch's The Sea, the Sea (1978), it is one of the rare European novels with a Buddhist theme. Kim and the lama, Dharma Bums on the Road, foreshadow the sprawling works of Jack Kerouac.
Posted by Liz at 5:21 PM No comments:

“Words are... the most powerful drug used by mankind.” Rudyard Kipling

Time again to save a word from the website www.savethewords.org

Van Gogh was fond of painting kexy bouquets of sunflowers in his old age.
Posted by Liz at 4:39 PM No comments:

"When there is nothing inside to express, all the techniques in the world make no difference." Bentje

I found the above quote in September 2009, The Artist's Magazine. I dabble in color pencil botanicals and pick up the occassional issue. I think the quote applies in a big way to writers so I thought I'd share it.

The above quote could also apply to kisses - speaking of which my first kiss scene is done and off to my critque partners for review. I'm think of entering it in a contest. I'll see if I can get my act together for the October 1 deadline. (still have to write a set-up scene to let the judges know what happen prior to kiss and incorporate any changes suggested by my circle of 3 or 4 if you include me)
Posted by Liz at 3:41 PM 1 comment:

A kiss is a lovely trick designed by nature to stop speech when words become superfluous. Ingrid Berman

Almost done with the first kiss scene of Love By Design. Even though I won the New England RWA First Kiss Contest for Playing For Keeps in 06/07 the fact remains that I haven't had a first kiss in 25 years.

But once I started writing it all came together.

as Mae West said "A man's kiss is his signature."
And I think my character Russ lived up to this. (and so does my husband)
Posted by Liz at 6:50 PM 1 comment:

Had fun at the meeting yesterday...lots of good people and good food

Some tib-bits from the October 2009 Writers Digest:

The Passion of Prose…and what it really means - Donald Mass
In his words….. - One technique is to include not what a particular plot turn means in the grand scheme of things, but instead what it means to your point-of-view characters. In other words, illuminate for that person not what has changed, but how she has changed -
- Ask yourself at every writing session why you care about what is happening in the scene at hand.

Join the Crowd - complied by Jessica Stawser
Some interesting sites but I don’t think I’ll pursue - at this point I must write, write, write…
….but did you know Sue Gruen wrote Water For Elephants during NaNoWriMo?

Telling Stories - interview w/ Mitch Albom - by Melissa Hill
Mitch says: A memoir should have some uplifting quality, inspiring or illuminating, and that’s what separates a life story that can influence other people.
(His new release, Have a Little Faith, is out on September 29!!!!)

There are also 3 articles on Plot & Structure which I will savor at a later date.
Posted by Liz at 3:31 PM No comments: 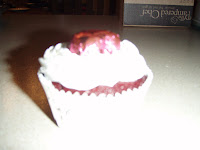 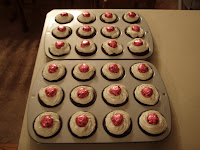 Today I'll be attending a celebration for the Hudson Valley RWA 25th anniversery. Kathy Attalla, our Treasurer, planned a networking lunch. She requested a list for Nationals of all members living in a 50 mile radius to attend. We have about 35 attending (including current local chapter members) and hopefully some will love us so much they will decide to join!

Kathy did a lot of hard work on this. All I had to do was bake some red velvet cupcakes, but they are totally awesome cupcakes. Martha Stewart bow before me!!!!
Posted by Liz at 7:40 AM 1 comment:

"In time, perhaps, we will mark the memory of September 11 in stone and metal, something we can show children as yet unborn to help them understand what happened on this minute and on this day. But for those of us who lived through these events, the only marker we’ll ever need is the tick of a clock at the 46th minute of the eighth hour of the 11th day."
George W. BushPresident of the United StatesDecember 11, 2001

Ain't that the truth?
Even today, September 10th, I can feel the tears welling in my eyes. I have to fight not to wallow in it all. Have to turn my head away from footage on the T.V. Of course, this isn't about me but those who died that terrible day and the heroes called into action.

A collection of good sentences resembles a string of pearls. Chinese Proverb

Been busy since my last post. A good busy...although I didn't get much writing done.

I did read the new RWR. Here are some items I found interesting

Writers On Writing - featuring Cindi Myers by Eillen Putman
"Those years of rejection were hard, but I told myself this was my apprenticeship - a ballet dancer doesn't start out with a starring role, and a violinist doesn't begin as first chair. The only way I knew to get better as a writer was to keep writing. I learned a lot from every manuscript I completed.

Work Smarter, Not Harder by Jane McBride Choate
Elaine Levine - "I try to make one product handle mulitple things. I have a serialized prequel to my book on my web site." She records clips to have a audio/visual on her web site, republish it on YouTube and on various podcast directories.
Rosane Kean found the Natural Reader program that will read anything written in Word and PDF formats. There is a free version that will read several paragraphs at a time.

How to Run a Web Site Contest (Without Going to Jail) by Courtney Milan
- okay after reading this I may never run a contest - but if I do I should state... "The odds of winning depend upon the number of participants."

One more thing...
My writing frind Gina Rosavin took first place in the sexy category of Summer Sizzle Contest. The editor at Samhain requested to see her manuscript titled In the Devil's Arm. Congrats Gina!
Posted by Liz at 2:03 PM No comments:

Be your own hero, it's cheaper than a movie ticket. Doug Horton

My hero for Love By Design is a cross between Matthew McConaughey and Sawyer from the TV series LOST. (yum yum). - I'm about 75 pages in and the Sawyer in my character is taking over. I just wrote this scene and it's so him.

This is a rough draft as you will see but I had to share...

What one?”
Yellow cake in a fancy paper cup with fluffy pink icing plopped on top tempted him. He wondered how many calories the treat contained and how many grams of fat. Russ didn’t get six pack abs from drinking beer and eating junk food. Which reminded him at some point he’d have get his workouts in. Otherwise his shirt would be staying on and he’d get fired from his moonlighting job.
“No, thanks.” He patted his stomach. “ ?????????”
Some more dialogue here….
“It looks like a cupcake made for girls.”
“Sugar and spice and everything nice." Victoria waved one under his nose.
The scent of vanilla hit him hard. “Are you talking about you or the cupcake?”

Seeeeeeee....can you just picture Sawyer saying this (but with an Aussie accent). Be still my heart . I'm falling in love with my hero! Shhhhh....don't tell my husband. LOL
Posted by Liz at 7:27 PM No comments: