“Lipstick is not just for looking glamorous; it can be used to signal for help on windows and other surfaces.” Nancy Drew

Get A Clue - Life Wisdom from Nancy Drew
Everything You Ever Needed to Know about Life, You Can Learn From a Teenage Sleuth - By Amy Helmes

Raise a cyber hand if you are/were a fan of Nancy Drew. I was fan - that is until Nancy Drew (Pamela Sue Martin) kissed Frank Hardy (Parker Stevenson) in the television series. But I’m mostly over that - I mean it’s not like she kissed Joe Hardy (Shaun Cassidy - sigh, sigh, sigh) - if that were the case The Hardy Boys would have been investigating the murder of Nancy Drew - LOL.

Anyway - so I am a fan and I picked up the book below that included magnets of Nancy Drew book covers like The Hidden Staircase. 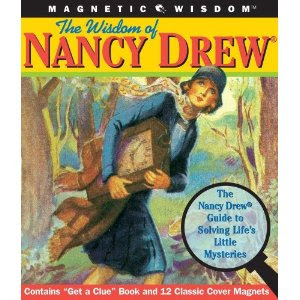 I took the quiz at the end of the book and scored 21 out of 25 making me an ace detective.

Chapter 4 is titles - Hot Dates, Heartaches, and other Courtship Capers
The author makes a good point that “bad boys aren’t Nancy’s cup of tea - having helped to apprehend too many to ever date one”
Her boyfriend Ned - which she meets after he helped her reattach the bumper to her car after an accident - is “not needy for her attention nor threatened by her intelligence - and she does not set aside her own ambitions or sacrifice her independence”

She is a fine role model for teenage girls… unlike the girl from Jeepers Creepers who decides to investigate a well where she saw a man shoving what looks like body bags down it - that girl is what we call in the writing world as Too Stupid To Live.

One more quote from our girl Nancy If worry were an effective weight-loss program, women would be invisible.” Nancy Drew'
Posted by Liz at 5:19 PM