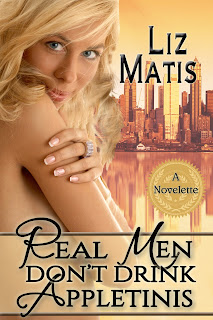 Buy link for Kindle  only .99cents!
Buy link for NOOK  only .99cents!
Here is an excerpt:
Ava slipped from the stool and slid next to her target. “You know this is a martini bar?” She held up her empty glass. Despite the number of people waiting for drinks, he only had to nod at the bartender to order her a refill.
His gaze then captured hers. “I’m a rebel.”
Ethereal green. That was the only way to describe his eyes. Almost lost in the depth of his stare she forced herself to speak. “So you’re looking for a girl who can belt back a scotch?”
A smile appeared on his face. “That would be asking too much. I’d settle for a girl who liked a cold beer.”
“Wine?”
Still smiling he shook his head. “High maintenance.”
“You came to the wrong place then.”
He handed her the drink and said, “From where I’m standing I’m in exactly the right place.”
Posted by Liz at 6:14 PM