Who said - “I want women to be liberated and still be able to have a nice ass and shake it” ?? 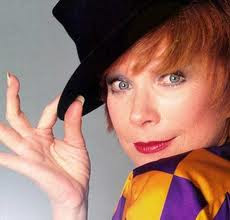 Shirley MacLaine that's who. She was interviewed on Oprah today so I had one of Oprah's 'ah hah' moments and knew Shirley would be the next in my quotes of famous women series (which used to be the starlet quote series)

Do you remember the scene in Terms Of Endearment (which she won an Oscar for) where she screams at the nurses to give her daughter a shot for pain? I hadn't but they replayed it on the show and WOW.

Here are some more quotes from her...

"Fear makes strangers of people who would be friends.” Shirley MacLaine

"I think of life itself now as a wonderful play that I've written for myself, and so my purpose is to have the utmost fun playing my part.” Shirley MacLaine

"Dwelling on the negative simply contributes to its power” Shirley MacLaine

"It's useless to hold a person to anything he says while he's in love, drunk, or running for office.” Shirley MacLaine

"The best way to get husbands to do something is to suggest that perhaps they are too old to do it.” Shirley MacLaine

"The person who knows how to laugh at himself will never cease to be amused." Shirley MacLain
Posted by Liz at 6:03 PM