I am not handsome or sexy. Of course, it's not like I am hopeless. Keanu Reeves 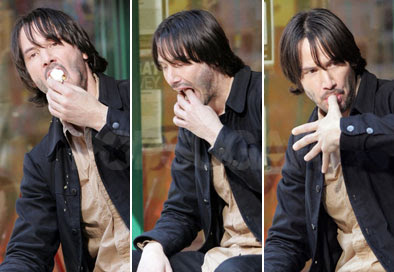 Ok so it's not part of my Quotes By Famous Women Series but I heart Keanu Reeves and you gotta to love a guy who eats a cupcake with such gusto! Here are some great quotes from Keanu (who by the way is very sweet - saw him at the WFF)

I'm Mickey Mouse. They don't know who's inside the suit.
Keanu Reeves

Kissing someone is pretty intimate, actually very intimate, and your heart always kind of skips a beat before you do that.
Keanu Reeves

The simple act of paying attention can take you a long way.
Keanu Reeves

On a good night, I get underwear, bras, and hotel-room keys thrown onstage... You start to think that you're Tom Jones.
Keanu Reeves