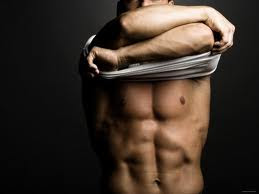 Six more from Love By Design... the cameras are rolling as Victoria is explaining to Russ what he has to build for the room make-over...


Russ didn’t take off his shirt as much as he stripped it off exposing a six-pack to rival any man on the cover of Men’s Health. Tan, taunt skin stretched tightly across his chest. As a child Victoria had been fascinated by colors and textures; always touching and exploring the world around her.
She was no different now.
She gripped the worktable so she wouldn’t reach out to glide her fingers over his glistening skin. If Michelangelo could travel though time he’d cry for a fresh block of marble, though she doubted even he could replicate the chiseled form of Russ’ body.
Posted by Liz at 12:01 AM