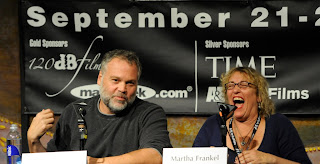 This was the second year I attended The Woodstock Film Festival. I love being around all these independent creative people!

My sister (the actress) and I (the writer) attended the panel called Actors Dialogue. Vincent D’Onodrio from Law and Order: Criminal Intent was this year’s surprise panelist. He also played Edgar, a giant cockroach-like alien who inhabits the body of a farmer in Men In Black. (How he created that character is a story onto itself.)
What can a writer learn from an actor? Here we go….
Actor: Preparation and commitment. He learned his craft before his big break with director Stanly Kubrick. D’Onofrio said that as a young actor he was amazed at the lack of preparation of some of the actors on set, which led to Kubrick firing them and sending them on their way. D’Onofrio was ready and in Full Metal Jacket he created one of those most shocking moments in film – he did it in 3 takes without direction from Kubrick.
Writing: How prepared are you? Have you studied your craft? Whether it’s an MBA in English, classes at a conference, or breaking down books in your genre – get prepared and keep on learning and growing. Are you committed to your writing?
Actor: He said Kubrick didn’t see the story as a whole or even in scenes but in 35 mm shots.
Writer: Every sentence is important. Look at each line we write and ask how it contributes to the whole.
Actor: Someone from the audience asked him how he prepares for a role and he said the first thing as actor you have to realize is that its all about Story, Story, Story (he karate chopped the table 3x times for emphasis). As an actor he asks himself how does my character help tell that story.
If you are familiar with Criminal Intent it was his decision to do the slight tilt of the head/bend of the character (it came about when he was questioning a suspect and the actor would only look at the table so he did a have bend until he caught the gaze of the other actor). Those famous pauses? – yeah he was told he couldn’t do that because it created dead air but he held his ground because he believed in his vision of the character.
Writing: It’s these little nuances that make a character memorable. What can you do to make your main character memorable? How does your character(s) help tell your story?
Actor: The best piece of advice he received as a young actor? Take it seriously. He was told he was great – that even when he failed – he was still great – but he needed to respect his craft and stop dangling one foot in – put both feet in and commit to your craft.
Writing: I’m going to take this one step further – Do you respect YOURSELF as a writer? If you do then you better log off now and get writing. (that is after you leave me a wonderful comment –lol)

Next time I’ll talk about the movie screening I attended and the problems of book to film and the director's answer to the question I posed.
Posted by Liz at 5:27 PM