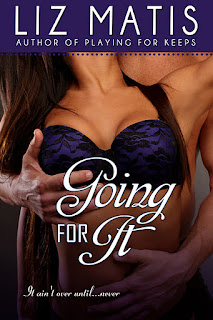 ***
Hannah rolled over and tried to fall back asleep, but the sounds emitting from the monitor of father and daughter bonding with a late night lullaby kept her awake. She bit her nail and smiled as she listened. Jake’s humming had immediately settled Maxine. It was like she remembered her father’s deep voice from when he hummed to her while rubbing Hannah’s swollen belly.
Unable to stay away, she tiptoed to the nursery and peeked in. Seeing her big, powerful husband lovingly hold their child in his arms, rocking back and forth as he sang Twinkle, Twinkle Little Star was sexier than anything in the world.
This tiny creature had the scariest running back in the NFL wrapped around her pinkie finger.
She snuck back to bed as Jake returned a fast asleep Maxine to her crib. Along the way Hannah slid her silk robe to the floor, then shed the tank top, and then stepped out of her black-laced panties, leaving a trail for Jake to follow like Hansel. Only Jake was no boy in a fairy tale. He was her knight-in-white-boxer-briefs. She slipped between the sheets.
Jake entered the room twirling the panties around his finger. “I thought you needed sleep.” He raised a thick black brow, which was such a sexy contrast to his smooth caramel colored-bald head.
“I need you more.”
Jake tossed the panties over his shoulder, took off his boxers, and then covered her naked body with his, the weight of him as familiar to her as her own body. A slow, steady rush filled her. In the stolen moments during the day their lovemaking was hard and fast, but in the quiet of the night, slow and intense.
Jake rolled over to get a condom. She stayed away from birth control pills since they could put up to ten pounds on her body. Ten pounds she couldn’t afford at this point in her career. So after literally busting her butt to regain her modeling body back, she was crazy to want another baby. But that’s exactly what she was. Crazy in love and she wanted her little family to grow.
“No, don’t.” She reached out and pulled Jake back to her.
“I thought—
“I want Maxi to have a brother to boss around.”
Jake’s wide smile still caused her heart to flutter.
“It would be nice to even the score around here.”
“Ha! You love it.”
“I do at that.”
“Good. Now, give me that rosy, after sex glow to make up for missing sleep.”
“Hannah, you’re going break the lens with the glow I’m going to give you.”
His lips descended on hers. With a smoking kiss that would leave a blush on her face for hours and every time she relived it in her minds eye, Hannah knew she was the luckiest woman alive.
Posted by Liz at 6:18 PM