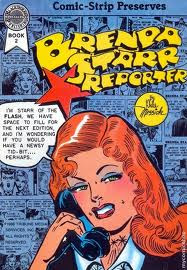 Extra! Extra! Read all about it!

A testament to the times (1940) the creator Dale Messick submitted her work under a male first name (her first name is Dalia) otherwise editors wouldn't even look at her work never mind publish it.

Like the creator taking on the male world of comic strips, Brenda Starr took on the male dominant world of journalism (hell everything back then was male dominated). Starr had it all - glamorous, fab career, and men. Even for a young girl in the 1970's (things like Title 9 hadn't passed yet) she was larger than life.

(Yeah, I definitely going red for my 48th birthday - lol) 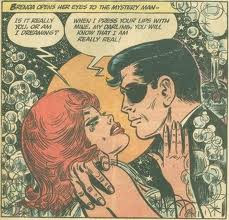 Though her and Basil St John did not have a happily ever after (HEA). Why? In the words of Brenda Starr -

"Well, it WAS romantic until we got married."
Posted by Liz at 7:13 PM