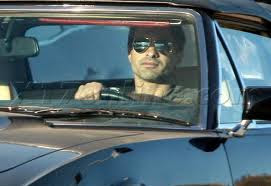 This week I’m selecting my six from Chapter 2 of Playing For Keeps, which was rejected this week by Carina Press. (long suffering sigh...)

Playing For Keeps is about a woman sportswriter and a professional football player.
Here Samantha’s police detective brother – who Ryan went to college with - has just told Ryan not to pursue Samantha but also ask him to make sure none of the players give her a hard time in the locker room. Ryan agrees but is angry thinking the brother doesn’t think he is good enough for Samantha.


“I’ll be your watchdog for now, but don’t expect me to roll over and play dead.”
“As far as my sister is concerned, there is one part of your anatomy that better be dead.”
“Don‘t worry about it.” Ryan climbed into his car and closed the door, shaking his head in disgust. When it came to Samantha, that part of his anatomy didn’t understand the command ‘play dead’. He'd need anti-Viagara pills to keep his promise to Samantha's brother.
Posted by Liz at 12:01 AM