"Women directors are alphas - they have to be." Jeanne R. Berney 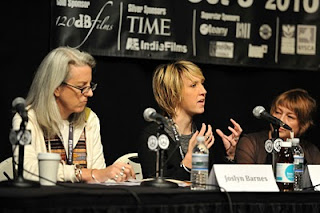 Here is my report from the Woodstock Film Festival.

Since it was my first year attended I only signed up for 1 event on Saturday and one on Sunday.

Amazing Women In Film
Moderator:
Thelma Adams (not in picture)has twice served as the New York Film Critics Circle Chair. She has written for “The New York Times,” “The New York Post,” “O: The Oprah Magazine,” “Marie Claire,” “The Huffington Post,” “Interview,” and “More.” Amy Dotson (in the middle) is the Deputy Director of IFP, the nation’s oldest not-for-profit membership and advocacy organization of independent filmmakers. She provides ongoing support and mentorship to over 350 independent filmmaker alumni each year and serves the independent film industry and community by connecting them with new, ‘off-the-radar’ creative talent.Joslyn Barnes (on the left) co-founder of Louverture Films, is a screenwriter and Emmy-nominated producer. She is the author or co-author of numerous commissioned screenplays for feature fi lms including the upcoming “Toussaint,” “The Cosmic Forest,” and the award-winning “Bàttu.” Jeanne R. Berney (on the right) For the past several years, Jeanne R. Berney has served as Director of Public Relations and Marketing at the Film Society of Lincoln Center

Dotson: Sees increase in women of all ages and outside of the normal NYC/LA mainstream becoming involved in film

Barnes: She feels women involved with film is trending down –citing stats such as
-Only 2% of cinematographers are women
-Women directed only 15% of the top 250 movies.
-Only 30% of reviewers are women

Barnes: Points out that if this were a panel of men their family wouldn’t even come up. There is an inequitable expectation for women versus men.

Dotson: Networking and mentorship is so important
If you are stalled or told no – ‘just find a way to make it happen. You have to decide if you are in it for the money or for the love of it – this will decide the movies you want to make.

Barnes: When women are producing or directing they hire more women.

Barnes: Biggest obstacle is the link between financing and distribution. The story could be great but if sales estimates aren’t then the film doesn’t get made

Barnes: Not only are your competing will other films but with other forms of entertainment. Says while video games may give the player a certain feeling of democracy and freedom they are being monitored. (I thought this was an interesting comment)

The floor was opened to questions. There was one woman who said she finished a script. Barnes asked her what is was about but she wouldn’t say because it was autobiographical. Or was she afraid someone was going to steal her idea? I don’t know.

There was more to this panel discussion than I scribbled down here. My thoughts are scrambling around inside my head! It was enlightening discussion and I’m glad I attended. Next year I'll sign up for more panels and films. It’s always fun to be around creative people whatever the form.