Countdown Spotlight - Day 5 - The Sport of Romance - with CM Doporto

FIVE days until The Sport of Romance releases! - You can pre-order it now for only 99cents! Yes, 10 books, 10 authors, 1 Hot Price! (Links below)

Each day until release day, I'll be spotlighting a teaser snippet from one of the books included.

I stepped out of the director’s office and entered the main area. Standing in all his six foot two glory was the star quarterback of our universities’ football team. I had never seen him in person, and I 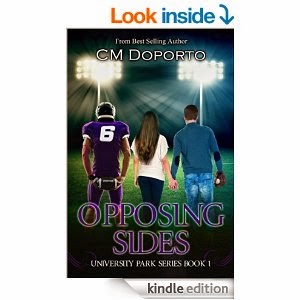 felt like a midget looking up at him.  Even though I didn’t know him personally, I’d heard and read enough about him to know he was a womanizer and had a drug problem.


Reason number 3 — don’t lust over something that isn’t yours.